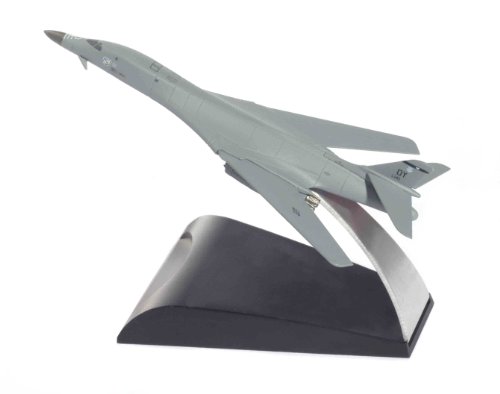 The US Air Force’s only serving variable-sweep wing aircraft is the B-1 Lancer bomber. The futuristic design was originally conceived in order to create a long-range, low-level, supersonic penetrator bomber that could deliver nuclear weapons. Built by Rockwell, the B-1B Lancer appeared in 1986, and it has now been converted to conventional bomber missions. The “Bone” (the name is taken from its designation B-One) is a long-time supporter of missions in Iraq and Afghanistan. Since 2003, the B-1B has helped deliver conventional bombs against targets in Iraq. A typical bomb load includes the GBU-31 Joint Direct Attack Munition (JDAM), a weapon that was heavily used in Iraq. Indeed, the B-1B was used on April 7, 2003 in an attempt to bomb Saddam Hussein and his two sons into oblivion. At the height of Operation Iraqi Freedom, a B-1 was permanently on station to provide a rapid precision bombardment capability. Today a total of 67 Lancers remain in service. Dragon Warbirds has produced a 1/400 scale model of this advanced bomber. This model is a brand new tooling, with the fuselage made of die-cast metal. The fuselage has then been mated to the plastic injection-molded wings and landing gear. Of interest, the variable-sweep wings are set in their rearmost ‘swept’ position for high-speed flight. In keeping with is high-speed configuration, the bomb bay is depicted as closed to preserve the sleek aerodynamics of this bomber. The lines and details of the B-1B Lancer are accurately replicated. As the Dragon Warbirds range experiences a resurgence, this new offering is a dynamic and impressive model well worth adding to collections.