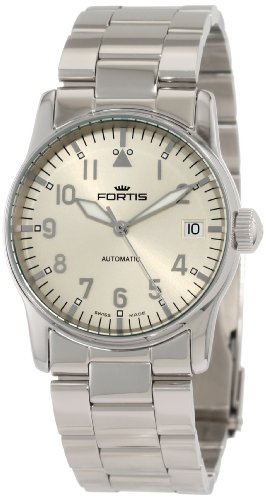 For female pilots or those women appreciating the plain and straight look of the FORTIS Flieger watches, FORTIS has created a new Flieger model especially for ladies with a smaller wrist. The watch with a case diameter of 35 mm includes all the features FORTIS stands for: precise Swiss Automatic movement, clear design and best legibility.

FORTIS belongs to the traditional Swiss watch brands, which has been active since its foundation in 1912 without interruption. As the world's first manufacturer of automatic wristwatches in 1926, FORTIS went down in watch history by producing the first automatic watch, the legendary Harwood, in a series production. In the middle of the '50s and '60s, to the climax of the automatic wristwatches, FORTIS enjoyed a good reputation as well as a worldwide brand awareness and distribution network.

In the '80s, FORTIS was known as a manufacturer of functional, reliable mechanical wristwatches. In 1994, after endurance tests on the borderline of modern physics, the Star City Training Center chose the FORTIS Official Cosmonauts Chronograph as part of their Official Cosmonauts' equipment. Since then, FORTIS automatic wristwatches have proven their space capability in several missions, even outside of the protective space station in outer space.

Based on the intensive collaboration with the experts in space travel, a unique new watch was developed: The FORTIS Official Cosmonauts Chronograph Automatic Alarm. A real spin-off from space and a world's first, the company came out with the FORTIS chronograph automatic with a mechanical alarm. With the development of this movement, FORTIS has earned a lot of approval from competitors and the professional world.

Exactly 10 years after the first official flight, FORTIS was reconfirmed in 2004 as the official wristwatch supplier of the Russian Space program on board of the ISS still today. FORTIS will also accompany space travelers for the first Mars mission as the official supplier of the Mars 500 mission, which started in June 2010 and will take more than one and half years to complete. Crew members can rely on their FORTIS Automatic watches during this long test trip.

As a longtime partner of space organizations, FORTIS invests in modern technologies and ensures in this way the future of the 100-year old brand in an ever-changing watch market.