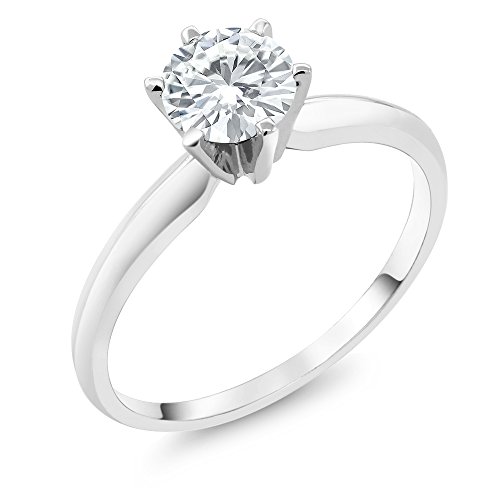 Moissanite are man-made gems are more durable than diamond, sapphire, ruby or emerald.

Moissanite is a rare, naturally occurring mineral also known as silicon carbide, which was first discovered by the Nobel Prize-winning chemist Dr. Henri Moissan at the site of a massive meteorite strike in Arizona. This intriguing new stone was named Moissanite in his honor, and Moissan spent the rest of his life attempting to recreate this rare mineral in his laboratory. It wasn't until the late 90's that scientists - working in a research laboratory located in Research Triangle Park, North Carolina - developed the innovative thermal growing process that creates silicon carbide crystals. These crystals are fashioned into Moissanite gemstones that rival any natural gemstone for fire and brilliance. These man-made gems are more durable than diamond, sapphire, ruby or emerald.

IS MOISSANITE A BRAND OF DIAMOND OR A SIMULATED DIAMOND?

No. Moissanite is not a substitute for diamond, either scientifically, chemically or emotionally. Charles & Colvard created Moissanite is a unique gem with its own set of chemical and optical properties that exhibit more fire and brilliance than any other gemstone.

WHAT PROPERTY OF MOISSANITE MAKES IT SPARKLE WITH SUCH EXCEPTIONAL BRILLIANCE?

The most significant optical property affecting a gemstone's brilliance, or sparkle, is the refractive index or RI. The RI of Moissanite ranges from 2.65 to 2.69, meaning it displays more brilliance than diamond (with an RI of 2.42) or any other popular gemstone.

WHAT GIVES MOISSANITE ITS FIRE?

A gemstone's fire is determined by a gemological property called dispersion. Dispersion refers to the prism effect that occurs when pure white light enters a non-opaque object, breaks into spectral (rainbow) colors, and reflects back to the viewer. Moissanite's dispersion is 0.104, which exceeds that of any gemstone, including diamond, ruby, sapphire and emerald.

DO OTHER GEMSTONES HAVE MORE FIRE THAN MOISSANITE?

Moissanite's fire exceeds that of any popular gemstone, including diamond, ruby, sapphire and emerald. Fire can be measured scientifically; with a dispersion of 0.104, Moissanite has 2.4 times the fire of diamond. No other gemstone or jewel compares to Charles and Colvard Created Moissanite with regard to fire.

WILL MOISSANITE FADE OR CHANGE COLOR OVER TIME?

No. There are no likely situations in which the color of Moissanite will be permanently changed. Moissanite does undergo a temporary color change when exposed to extreme heat from a jeweler's torch during jewelry repair, but with proper bench techniques there will be no lasting damage, and the stone will return to its normal color once it cools.

IS MOISSANITE GRADED ON THE GIA DIAMOND COLOR GRADING SCALE?

What We Offer: Gem Stone King jewelry is both timeless and modern, which makes it the perfect choice for all of the significant moments in your life. From proposals to anniversaries to holidays, our pieces are versatile and reliable, which is exactly what women today are looking for in their jewelry. Our collections are filled with one of a kind pieces that sparkle with shine and brilliance with such luxurious qualities, you’ll know a Gem Stone King piece when you see it.

Design: Gem Stone King pieces are carefully planned and thought out during the production stage. Each piece is uniquely designed to stand out and make great gifts to friends and family. We supply jewelry for all occasions and milestones we carry pieces that are timeless, modern, and contemporary our vast selection of gemstone jewelry and intricate jewelry designs cannot be beat.

Find your ring size using our finger size chart. This guide allows you to easily find your correct size or compare your size against other countries if making a purchase using an international website.