Back up a lifetime's worth of memories with Time Capsule, a wireless hard drive that works seamlessly with Time Machine in Mac OS X Leopard and Snow Leopard. It's also a full-featured 802.11n Wi-Fi base station with simultaneous dual-band support. Guest networking - Set up a separate Wi-Fi network with a separate password for your visitors. Simply enable the guest networking feature, and your guests can use the Internet but can't access other parts of your private network, such as your computers, printers and attached hard drives. Wireless drive sharing - Time Capsule also works great as a wireless hard drive, whether you have a Mac or a PC. It sets up in a snap, giving you a networked hard drive you can use for storing and sharing all kinds of files. Print without wires - Print documents, photos and more from any room in your home or office to a central printer connected to Time Capsule via USB. Strong security and access controls - Protect yourself with the built-in firewall and industry-standard encryption technologies including WPA/WPA2 and 128-bit WEP. Works with iPad, iPhone, Apple TV and more - Time Capsule works with Mac computers, PCs, iPad, iPhone, iPod touch, Apple TV and virtually all 802.11a/b/g/n Wi-Fi wireless devices. System Requirements - Mac with Mac OS X v.10.5.7+ or Windows XP/Vista/7 and Ethernet or WiFi capability

With the Apple Time Capsule, you'll be able to give your computer automatic, constant protection over a blazing-fast, secure wireless connection. Time Capsule includes a wireless hard drive designed to work with Time Machine in Mac OS X Leopard or later. Just set Time Capsule as the designated backup drive for Time Machine, and that's it. 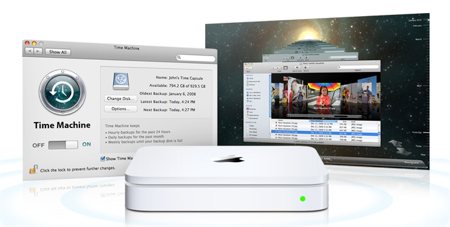 This 4th generation version of Time Capsule features a 3 TB hard drive. It also operates in the 2.4 GHz and 5 GHz bands simultaneously to ensure top performance for all your devices, and it provides a Guest Networking option for easy Internet sharing. You'll be able to share your entire wireless network with up to 50 users at the same time as well as turn a USB hard drive into a shared drive that's accessible wirelessly on your network and now over the Internet.

Time Capsule is your one place for backing up everything. Its massive 3 TB server-grade hard drive gives you all the capacity and safety you need. So whether you have 250 songs or 250,000 songs to back up, you won't run out of room.

Depending on how much data you have, your initial backup with Time Capsule could take overnight or longer. After it completes, only changed files are backed up--automatically, wirelessly, and in the background--you'll never have to worry about backing up again. And new technologies in Time Capsule and refinements to Time Machine make backing up to Time Capsule even faster than before.

If you have multiple Mac computers in your house, Time Capsule can back up and store files for each Mac running Mac OS X Leopard or later on your wireless network--no need to attach an external drive to each Mac every time you want to back up.

Works with Mac and PC

The Apple Time Capsule is based on the Wireless-N (IEEE 802.11n) specification and it uses multiple-input multiple-output (MIMO) to transmit multiple data streams simultaneously--resulting in data transfer speeds up to five times those of 802.11g wireless networks while also providing up to twice the range. It's compatible with Mac computers, PCs, and wireless devices such as iPad, iPhone, and iPod touch that use 802.11a, 802.11b, or 802.11g technologies.

Time Capsule operates simultaneously on both bands, without you having to choose one spectrum over the other--enabling your Wi-Fi devices to receive optimal performance in speed and range. Plus, devices that can connect to Time Capsule on either band will automatically use the best available band. 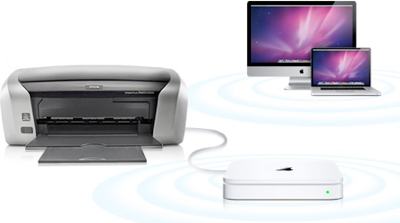 Share a printer with your networked Macs and PCs.

Allow guests to use your Internet connection without sharing your password or giving them access to the rest of your network. Simply enable the guest networking feature using the AirPort Utility application and create a separate Wi-Fi network just for your friends. You can set up this guest network with a different password or with none at all. Your primary network--including your printer, attached drives, or other devices--remains secure.

With its wireless printing capabilities, you can plug a printer into Time Capsule, add it to the printer list on your Mac or PC, and start printing--all without a cable tethered to a computer. Time Capsule uses the Mac- and PC-compatible Bonjour networking technology to let everyone on the network take advantage of one centrally available printer.