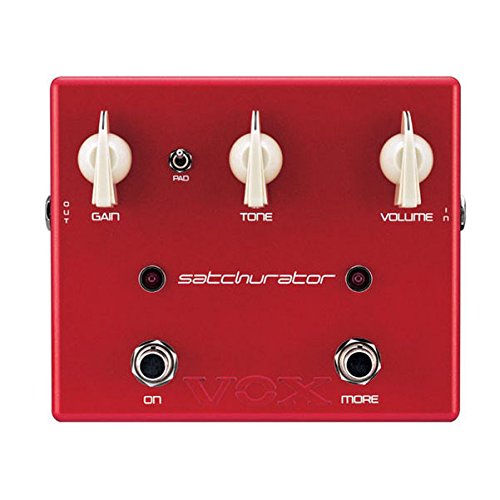 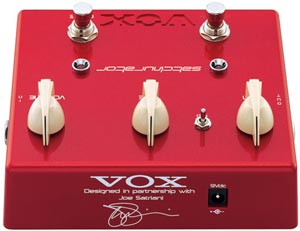 Drawing on Joe Satriani's knowledge accumulated from decades of groundbreaking performances, both live and in the studio, VOX created a breakthrough in guitar tone--the Satchurator distortion pedal. Designed to Satriani's exact specifications, the Satchurator produces Satriani's signature tone and adds new features and improvements never before combined in a distortion pedal do that players of any style can find the distortion tone they've been looking for. 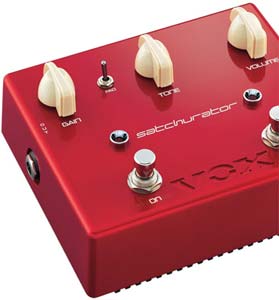 After almost a year of painstaking experimentation and road testing, Satriani and the VOX R&D team discovered the secrets to capturing the ultimate distortion tone in a modern-day pedal. The Satchurator is capable of very high gain levels, but operates more quietly and musically than other modern distortion pedals.

It also preserves the tone and pick-attack of the guitarist plugging into it, regardless of style, from subtly distorted blues tones through classic rock and shred. The result is a professional-quality pedal that recaptures sought-after vintage and modern sounds in a powerful, versatile and extremely musical pedal design.

This little red box is a monster tone generator. VOX delivers what you need for the stage as well as the studio: a distortion pedal that's highly responsive and produces a big, natural, harmonically rich tone that's compatible with any guitar/pedal/amp configuration.

This analog distortion pedal designed under the complete supervision of Joe Satriani features controls for Gain, Tone, and Volume, and a 'More' gain boost switch enables two foot-switchable distortion sounds in one pedal. This gain boost is dramatic when the gain knob is set low, and is a subtle solo boost when the gain knob is set to maximum. A 'Pad' switch pads down input to allow for high gain pedals (such as modern wahs) placed before Satchurator. Up is pad 'ON'. Down is pad 'OFF' for full Satchurator effect.

The Satchurator's high-gain, low-noise design provides vintage to modern distortion sounds. The dynamic circuit is highly responsive to rolling off the guitar's volume and preserves the guitar's high end when the volume is rolled off. Cream chicken-head knobs allow for precise positioning and high visibility on dark stages.