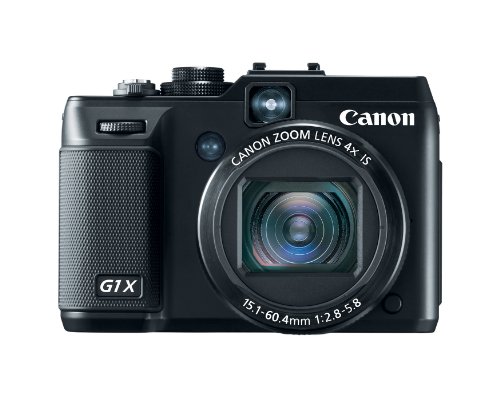 The Pinnacle of PowerShot

Bright, fast and more creative than ever: advanced technologies come together for an exciting new camera that moves beyond anything the G-Series has seen before. The PowerShot G1 X digital camera will inspire advanced amateurs who have embraced the G-Series to explore new realms of photographic expression, and give pros an excellent camera that complements their creative demands.

Canon 1.5-inch, 14.3 Megapixel High-Sensitivity CMOS Sensor
Canon engineers developed a sensor for PowerShot G1 X digital camera that is nearly the size of an EOS DSLR camera’s APS-C sized sensor, and built with a similar pixel structure—each pixel site is larger, allowing more light to be captured—giving the PowerShot G1 X a completely different level of image quality than compact cameras that have come before it. At 1.5 inches, the sensor is approximately 6.3 times larger than that of the PowerShot G12 digital camera. This heightened degree of sensitivity, along with 14.3 Megapixels, delivers several distinct advantages. Noise is dramatically reduced at high ISO speeds for clear low-light and nighttime shooting. Resolution at low ISO speeds is incredibly rich and precise. And, most atypically for a compact camera, the PowerShot G1 X digital camera allows you to create the intensely beautiful background blur that is the hallmark of DSLR cameras.

Beautiful low-light shots are possible with minimal noise and maximum detail in highlight and shadow areas. The system is the result of two technologies brought together in PowerShot cameras: a high-sensitivity imaging sensor, which is able to capture more light; and the DIGIC Image Processor, which actively reduces noise with high-speed image processing. The 14.3 Megapixel Canon CMOS sensor in the PowerShot G1 X incorporates advanced light reception technology that enhances sensitivity. The new DIGIC 5 Image Processor provides a major boost in noise reduction, expanding the usable range to an amazingly high ISO 12800. The HS SYSTEM thus lets you use higher shutter speeds to capture clearer images with reduced noise and blur. Shooting and Recording Modes Including 14-bit RAW + JPEG
The PowerShot G1 X offers a host of shooting and recording modes ranging from fully automatic to fully manual, plus Full HD movies and full-resolution High-Speed Burst HQ at a maximum of 6 frames*. The camera recognizes 32 shooting situations, automatically optimizing settings for achieving the highest quality shots on the go. Alternatively, you can exert complete creative control over the look and feel of your images. 14-bit signal processing, just as in EOS series cameras, gives images notably rich detail and smooth gradation. Compared with 12-bit processing, 14-bit offers a 4x increase in RAW data, makes a visible impact, giving images rich detail in both highlights and shadows as well as smoother, more natural tonal gradation for outstanding image quality.

Canon Full HD Video Advantage
In addition to the HS SYSTEM, the combination of the advanced CMOS sensor and DIGIC 5 Image Processor in the PowerShot G1 X digital camera makes it possible to shoot crisp, clear high definition video. Imagine the fun and excitement of being able to shoot spectacular 1080p Full HD video with stereo sound that you can later watch on your HDTV or download to your computer to share with family and friends. In addition to being able to shoot Full HD 1080p video at 24* frames per second, the PowerShot G1 X digital camera can also shoot 720p HD video at 30** frames per second.

button that lets you start and stop recording instantly. There is no need to go through layers of menus or operate switches or dials to switch to and from video recording mode. The camera is always ready to shoot stills or video whenever you want. The PowerShot G1 X also incorporates an electronic wind filter, which suppresses wind noise that can muffle or distort the sound. And unlike less sophisticated point-and-shoot cameras, the PowerShot G1 X lets you use the full range of optical zoom when you’re shooting a video.

HDTV Playback via HDMI with CEC Support
It’s easy to enjoy and share the videos you shoot with the PowerShot G1 X. Simply connect its HDMI terminal to your HDTV using an HDMI cable. And because the PowerShot G1 X supports HDMI-CEC technology, you’ll be able to control the playback of your images and videos on any CEC-enabled HDTV using the TV’s remote control. (CEC – Consumer Electronic Control – is part of the HDMI specification, enabling components in a system to communicate with one another.)

With the PowerShot G1 X, you can also shoot video in the Apple iFrame format, which is a computer-friendly standard that speeds up importing and editing of videos. It keeps file sizes small, making it more convenient to upload or e-mail high-quality videos. The iFrame format enjoys native support in compatible Mac and Windows video applications, making it unnecessary to perform time-consuming and often quality-degrading conversions.

The latest advance in Canon Optical Image Stabilization technology, Intelligent IS analyzes camera movement and applies the best shake correction method for the shooting situation. For stills, the system automatically selects among Normal, Panning, Macro (Hybrid) and Tripod IS modes. When shooting video, the system automatically selects among Dynamic, Powered, Macro and Tripod IS modes. With Intelligent IS, you can concentrate on image capture, letting the camera make the most effective IS settings to assure the steadiest possible image.
3.0-inch Vari-Angle PureColor System LCD
With the PowerShot G1 X digital camera, difficult shooting angles won’t stop

you from getting the shot you want. The camera’s big 3.0-inch Vari-Angle LCD screen swivels out and rotates, tilting up and down to give you access to the highest and lowest angles for shooting flexibility that greatly enhances your creative expression. You can also capture perfectly centered self-portraits or put yourself into group shots. The LCD screen’s benefits don’t end with mobility. A resolution of 922,000 dots gives you an unprecedented level of detail in the images you’re composing. The high resolution level also makes it easy to read on-screen information when you’re adjusting camera settings and accessing shot information. Full-spectrum color is true and natural. As befits a high-performance camera designed for advanced users, the PowerShot G1 X digital camera is equipped with an optical viewfinder as well. Shoot SLR-style with the real image optical zoom finder, and customize the viewfinder for your vision with dioptric adjustment.

Electronic Level
The PowerShot G1 X even has a built-in electronic level that calculates the camera’s horizontal angle of tilt and displays the information on the LCD monitor. The feature makes it easier to capture a perfectly level shot every time.

High-Speed Burst HQ
Utilizing the increased processing speed and power of the new Canon DIGIC 5 Image Processor, High-Speed Burst HQ makes it possible to capture fast action stills at full resolution during continuous shooting. The results are exceptionally high-quality images recorded in rapid sequence. In this mode, the PowerShot G1 X can capture a maximum of 6 shots in a single burst.*


Movie Digest
Creating a video* containing highlights of a family vacation or an important occasion is a lot easier than you might think. When you use Movie Digest on the PowerShot G1 X, the camera will automatically record a short video clip (up to approximately 4 seconds) every time you shoot a still image. That entire day’s worth of clips will then be automatically combined into a single video.

High Dynamic Range
In High Dynamic Range, the camera will shoot three different exposures in succession and then merge them together to produce a spectacular image with highly detailed shadow and highlight areas.


Miniature Effect for Movies
Emphasizes perspective for a miniature effect by blurring upper and bottom portions of videos and stills.

Actual results may vary from examples shown above.
Final image may vary depending on picture composition.

The PowerShot G1 X digital camera gives you access to exciting EOS accessories including thenew Macro Light Adapter MLA-DC1, Macro Ring Light MR-14EX, and all of the Canon Speedlite flashes, long revered by professional photographers. The high output of Speedlite flashes brings out the depth and texture of your images in full, natural beauty. The ultra-lightweight Canon Speedlite 270EX II is a compact, high-performance flash unit that’s fun and easy, with adjustable illumination angle and guide number. The versatile new Speedlite 320EX features an LED light on the front of the flash body that can be used to illuminate nearby subjects in dim light, ideal for shooting video.
EOS-like Manual Shooting for Beautiful Images with Beautiful Detail
High Dynamic Range Scene Mode
Shooting in high contrast environments can often result in photos with overexposed and underexposed sections. So to tackle this problem, Canon developed the High Dynamic Range shooting mode to make shooting even more intuitive. Under High Dynamic Range* the camera will shoot three different exposures in a succession (underexposed, overexposed and normal) and then merge them into a single image. Underexposed areas are combined with the overexposed and vice versa, resulting in an evenly detailed image with flattering shadows and highlights.

What's in the Box?