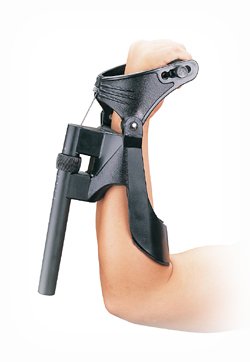 The Marcy WEDGE Forearm Developer offers an easy way to strengthen your forearm, wrist, and fingers. Enhance your grip strength and build your flexor and extensor arm muscles using one simple motion with the Marcy Wedge Forearm Developer. You can adjust the foam grip for a comfortable fit and adjust the resistance to take your workout to the next level!

At the early age of 19, Walter Marcyan began training with barbells and soon after won the central AAU Light Heavyweight Lifting Championship. From 1934 through 1940, Walter Marcyan began entertaining audiences as a Vaudeville Strongman, performing incredible feats of strength and balancing acts.

In the early 1940’s, Walter Marcyan moved to Santa Monica, California where he began training at the newly established Muscle Beach: a famous training facility that still exists today and where many of the legendary pioneers of bodybuilding such as Jack LaLanne, Bill Pearl, and Arnold Schwarzenegger began their careers.

In 1946, Walter Marcyan opened the first of seven strength training gymnasiums, House of Health, in the Los Angeles area. He was the first to offer personal trainers to his members and emphasized the importance of strength training to men, women and children.

In the early 1950’s, Walter Marcyan participated in the first organized body building competitions. Based on his own personal experiences, Walter Marcyan began building his own strength training equipment for his gyms in Los Angeles.

In 1959, Walter Marcyan founded Marcy Gymnasium Equipment Company. Walter Marcyan believed that everyone should have the opportunity and the knowledge to exercise at home with their own, professional grade equipment. Walter Marcyan was an innovator and a visionary. His patented designs were years ahead of their time and still widely used in commercial and home applications today.

Now, 50 years old and still going stronger than ever, the legendary Marcy brand continues to make its mark by offering new and innovative products to consumers worldwide.