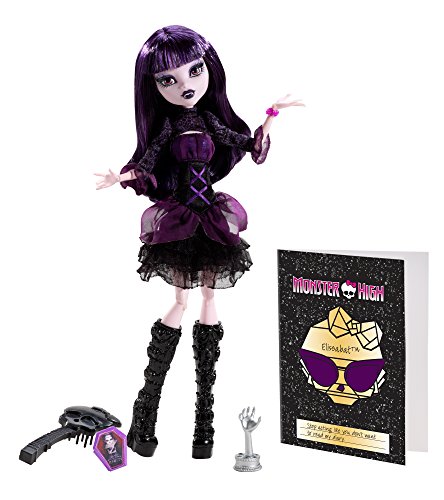 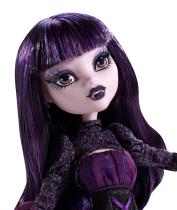 Elissabat is the star of the silver scream in Hauntlywood.
View larger 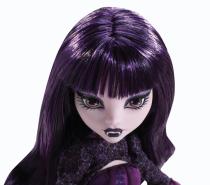 In this scary cute story, the ghouls of Monster High embark upon a quest that brings them from Transylvania to Londoom to New Goreleans and, finally, to Hauntlywood, where monster-movie magic is made! Here, they meet new characters and make new friends, whom they join behind the scenes, in front of the cameras and on the Black Carpet. Elissabat, a teen vampire and teen scream, is a regular in the new cast. She is a coffin of contradictions: an “un-natural” in front of the camera who has stage fright, a drama queen who prefers amon-star-ymity and a fashion icon who mixes romantic designs and a lot of black.

Queen of the Scream

With the intensity typical of her scaritage, Elissabat works hard to learn her lines and captivate the audience. Larger-than-un-life roles have earned her multiple awards, and her latest boovie is no exception. She’s got her recently released coffin movie case (“You can’t tear your eyes away!” screamed “cryp-tics”) and the clawesome award (shaped like a claw!) that she received for her riveting performance. Slip the coffin-shaped case into her hand to imagine interviews. Enchant audiences with a mesmerizing speech as she accepts her trophy, or develop her next award-winning role.

Elissabat doll is ready to take on any challenge dressed in a modern corseted outfit designed in her signature colors of black and deep purple. A hem of ruffle layers, a lace-up bodice and a sleek high neck honor her vampire scaritage and frightfully frilly style. Tall black boots and a pink bangle complete her to-die-for look.

Girls will love recreating favorite Elissabat scenes from the series or making up new stories on their own. Like her counterparts, the doll comes with a signature-style brush (a “mon-star” must always be ready for the creeparazi!), doll stand (to strike extreme poses) and a diary (with details the tabloids would love). Collect other dolls in the assortment, like Viperine Gorgon, Honey Swamp and Clawdia Wolf (sold separately) for a full behind-the-screams cast, or add accessories that include a dressing room and a premiere party set (also sold separately) to expand the fun to monster proportions! 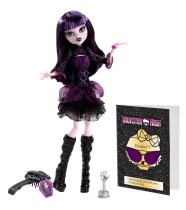 She wears a black and purple corseted outfit with frightful accents.
View larger

The ghouls have made it to Hauntlywood! With their freaky fabulous styles, these new stars are set to top the fear charts with a Black Carpet fashion show! Elissabat is an enchanting actress and star of the silver scream. She comes with the award she received for her riveting performance. Dressed in a modern corseted outfit, she captivates with a hem of sheer ruffle layers, a lace-up bodice and sleek high neck. Tall black boots and a pink bangle are to-die-for accessories. Doll also comes with signature-style brush, doll stand and diary detailing details the tabloids would love. Frights, Camera, Action! Doll cannot stand alone.