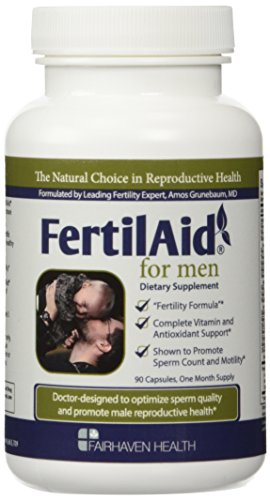 Male Infertility is a Factor 45% of the Time

The male factor has been shown to be the underlying cause of infertility in 45% of couples who have difficulty getting pregnant. When you know the whole story of sperm, it becomes fairly easy to spot the ways that the male factor can become an issue. Unlike a woman who is born with all the eggs she will ever have, a man must constantly produce new sperm. In a healthy male, sperm are produced continually at a rate of roughly 100 million sperm per day and each sperm takes about 42 to 76 days of temps 2 degrees cooler than the body (hence the testicles hanging outside) to mature into a streamlined profile of sperm cells. Sperm production numbers are big because they have to be - a single ejaculation may contain up to 150 million sperm but only roughly 15% of those will be perfectly normal sperm that can penetrate an egg. We can see how male fertility is, in part, a numbers game - the more sperm, the better the chances.

But there is more to the sperm story. Motility and morphology are also key factors besides count - that is, sperm have to swim straight and fast and be of the right shape in order to reach and penetrate the egg. From the time the sperm is ejaculated to when the egg is fertilized, sperm will first have to swim through the cervical mucus and cervix, and then swim up the fallopian tubes. Considering that the size of a sperm is roughly 0.002 inches long (not visible by the naked eye), this would be about the same as going from Hawaii to L.A. (or at least it feels that way to the sperm!). The fastest of the sperm will take about 45 minutes and the slowest need around 12 hours to reach the egg. Most sperm never make it. They either run out of energy, go in the wrong direction, or chase their tails in circles. Some sperm have been killed off by natural antibodies or hostile cervical fluids. In the end, it's just a few, fine-figured sperm that find their way to the egg and hope to become the lucky one.

The final piece of the sperm story is sometimes overlooked but perhaps the most important. The head of each sperm contains 23 chromosomes to merge with an egg’s 23 chromosomes and begin a new life. This set of chromosomes becomes the basis for your child's health. Chromosomes participate in an array of essential tasks all throughout life starting with growth, development, and function of the body's systems. Structural changes to chromosomes can occur during the formation of sperm cells. Pieces of DNA can be rearranged within one chromosome or transferred between two or more chromosomes. DNA issues can cause medical problems for your baby and impact brain development and IQ. Any trying-to-conceive couple should set their goal to not only achieve pregnancy but do so with the highest level of DNA integrity in the chromosomes as possible.

Producing healthy sperm in the right amounts requires that the body have all the 'raw materials' it needs. FertilAid for Men optimizes the critical factors of sperm count, motility, morphology, and overall integrity of the sperm. FertilAid for Men is the top-selling male fertility supplement in the United States for good reason - it has helped tens of thousands of couples conceive. It has been clinically demonstrated in a double-blind, placebo-controlled study to increase the total number of motile sperm a man produces. (Study published in the American Journal of Andrology.)

Formulated by leading fertility expert, Dr. Amos Grunebaum, patented FertilAid for Men contains a proprietary blend of antioxidants, minerals, vitamins, amino acids, and herbs that have been demonstrated to improve male reproductive health, and increase a couple's chances of conceiving. FertilAid for Men is recommended for all trying-to-conceive men to help ensure optimal reproductive health and sperm integrity, regardless of whether or not a semen analysis (SA) has been performed. In cases of suspected or demonstrated low sperm count or low sperm motility, FertilAid for Men can be taken together with companion products CountBoost and/or MotilityBoost. Note that spermatogenesis (the creation and maturation of sperm) is a three-month process, and FertilAid for Men should be taken continuously until conception has occurred for best results.

Fortify Your Sperm to Increase the Chances of Getting Pregnant

Getting pregnant won't happen unless a well-shaped sperm makes it to egg. These key ingredients can boost count and increase quality of sperm:

Start Your Baby With a Clean Set of Chromosomes

The story is only half over once sperm meets egg. The sperm's 23 chromosomes need to be free of fragmentation or defect to give the baby the best chance at a healthy life. These key antioxidants help with sperm integrity:

Can I Take FertilAid for Men if I Have a Normal Sperm Count?

All men - regardless of their count or motility - can derive benefit from supplementing with vitamins, minerals, and herbs that have been demonstrated to improve sperm parameters. Your sperm parameters may already be categorized in the normal health range, but with depleted soils and environmental factors, it's safe to say that your sperm health can always be further optimized, and that may increase your chances of conceiving plus result in a healthier baby.

How Fast Can I Expect My Sperm Count to Go Up?

The nutritional benefits of FertilAid for Men may be experienced immediately as a result of comprehensive multivitamin, mineral, and antioxidant intake. Benefits of herbal properties will quickly increase over time. Take daily as per instructions (benefits may be mitigated by sporadic use). With FertilAid for Men, the interval for the development and maturation of sperm must also be accounted for: it may take over two months for sperm to mature and to become capable of fertilizing an egg.

How Long Can FertilAid for Men Be Taken?

We recommend you use FertilAid until you conceive. These are all natural supplements, and can be taken for an extended period of time without any issue.

If I Forget My Supplement One Day, Should I Double Up the Next Day?

If you forget a day, we recommend you just resume the normal dosage the next day.