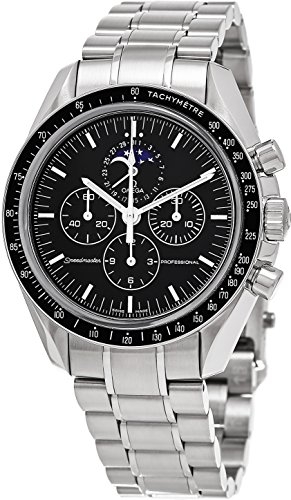 Channeling your need for speed and precision, the Omega Speedmaster Automatic watch is an impressive piece of hardware. This multi-function chronograph is powered by an Omega 1866 caliber manual-winding chronograph movement with a rhodium-plated finish and features a 48 hour power reserve. The large steel case frames a white dial with blue hands and hour markers and four tonal subdials. The subdial functions include small seconds, elapsed minutes and hours, date, and moonphase. In fact, this model is dubbed the "first man on the moonphase" watch, a reference both to the moonphase indicator and to the fact that the original Speedmaster watch was worn by the crew of the Apollo 11 mission. The dial is capped with an anti-reflective and scratch-resistant sapphire crystal and framed by a steel bezel with a tachymeter scale. This Omega watch is outfitted on a robust steel bracelet and rated water resistant to 100 meters.