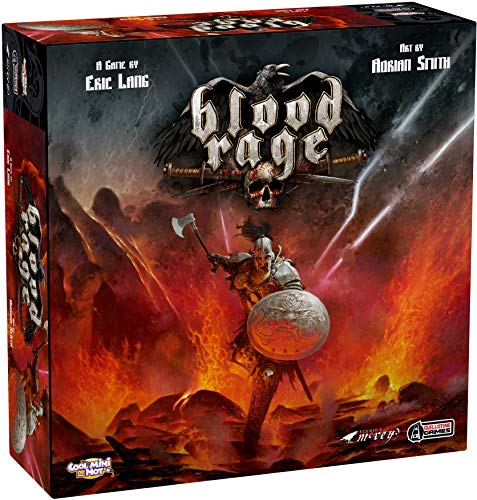 The End of the World is Approaching

Fierce clans battle over ancient lands for glory in the face of Ragnarok!

Introduce your rivals to the glory of Valhalla!

The prophesies have come true, and Ragnarok is coming. At the end of the world, players will take control of Viking clans, fighting over territory, earning glory, and dying in battle. Over the course of three ages, players draft cards and spend Rage to play them. Cards are used to complete Quests, improve the abilities of their clans, or to win battles.

The battles in Blood Rage are fought over territory using various clan members, leaders, and even ships. When the brute force of mortals in not enough to win a fight, players can summon monstrous figures drawn right from Norse mythology, like the Frost Giant, the Valkyrie, and the Sea Serpent.

The ultimate goal is glory, and whether that comes from fulfilling Quests, defeating opponents, or by being sent to the promised land of Valhalla, it’s all the same in the eyes of a Viking.

Featuring a straight forward rule set that players of all skill level can enjoy, Blood Rage will quickly have people focusing on their strategy. It’s a game steeped in mythological Norse imagery, with incredible art and dozens of beautiful miniatures. Embrace the thrill of running head long into battle. Living is for the timid. For glory!