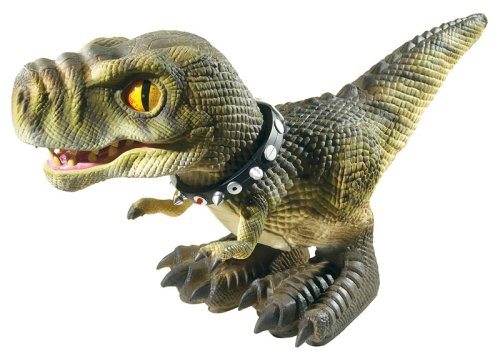 Ferocious, loyal and with an independent personality, D-Rex is the ultimate pet.

Ultra-fierce and unbelievably fun, the D-REX Interactive Dinosaur is a cool, prehistoric creature with a personality all his own. Designed to keep kids eight and up entertained for days, this robotic D-REX moves, roars, and responds to your child's voice and touch. A bone-shaped controller even lets you "train" him as a guard dinosaur or an attack pet.

Get Ready for Realistic, Imaginative Fun
Right out of the box, this scaly pet D-REX feels more authentic than most other dinosaur toys on the market. His rubbery, reptilian skin is loosely stretched to accommodate movement, and he has a slightly strange texture that is soft to the touch. While his oversized feet and a fun spiked collar balance his menacing teeth and his darting yellow eyes, he is still a little scary looking. Don't worry--you'll soon discover that he has a sense of humor and a soft spot for anyone willing to scratch the back of his head.

Before you start getting to know D-REX personally, you'll need to use a Phillips screwdriver to insert five "C" batteries in his tail and two "AAA" batteries in the bone-shaped controller. Once he's powered up, D-REX is ready to start showing off and responding to his surroundings. He'll roar, turn his head, and blink his eyes.

Cool Robotics Technology for Interactive Play
When you pet D-REX on the head, touch sensors let him respond with an appreciative roar. If he seems hungry, you can stick something in his mouth and he'll chomp away on it. And the bone-shaped controller lets you prompt five different types of behavior. Press "attack," and he'll launch forward while roaring. Press "prank," and he'll fart, burp, or roar. In seek mode, he uses a noise sensor to locate you and walk towards you. Due to the room's background noise, we found that he had some difficulty with this task. But it was funny (and kind of cute) when he bumped into walls and backed away in surprise.

Perhaps our favorite mode was "guard." In this mode, you can set D-REX up in front of your bedroom door or your favorite toys and he will scan the room, letting out a big roar if he detects the motion of "intruders." There's even a question mode that lets you replace your out-dated magic eight ball with dinosaur wisdom. Each time you press this button, D-REX will answer a question by nodding "Yes" or shaking his head "No."

D-REX is programmed to respond as a pet with an independent mind. This means that, despite his five-button remote, he won't walk where ever you want him to. Kids who expect to "drive" him around the room like a remote control car may be disappointed, but we actually enjoyed this fact a lot, since it made him more realistic. And we expect that kids who are fascinated by either dinosaurs or robotics will agree with us on this. As an added bonus, D'REX offers a battery-saving sleep mode, which parents are sure to appreciate.

What's in the Box
D-REX Dinosaur and bone-shaped controller.