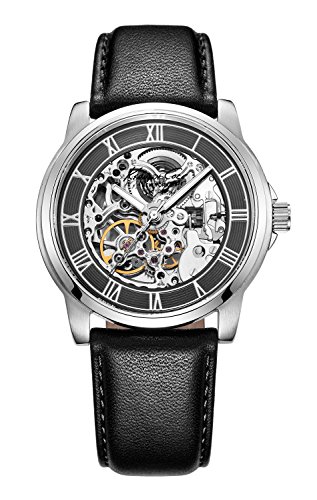 The Kenneth Cole New York Men's Automatic Gunmetal Dial Leather Strap Watch #KC1514 is for the guy who likes to know what the story is behind the story. This fun timepiece features a sleek, black leather band, which complements a round, silver-tone bezel. The dial is unique with a nearly transparent center that shows the watch's interior mechanism. The outer rim of the dial is gunmetal gray and features elegant, silver-tone Roman numerals. The hands are white and luminous and are complemented by a sweeping seconds hand. This watch is water resistant to 99 feet.

Fashion Designer KENNETH COLE founded his company, Kenneth Cole Productions, with the debut of a ladies' footwear collection in December of 1982. Today, the company manufactures internationally and distributes men's and women's footwear, accessories and clothing under the Kenneth Cole, Reaction, and unlisted.com labels, as well as offering over 30 product categories. The most recent addition being the Kenneth Cole Women's Collection due to debut for Fall 2000.

Kenneth Cole retail stores have expanded throughout the United States and abroad in Amsterdam, Hong Kong, Singapore and Taiwan. The Kenneth Cole Catalog mails to over 3 million consumers a year and the award-winning Kenneth Cole and Reaction websites receive thousands of hits per day. Kenneth Cole's marketing savvy has earned the Company a renown image as a forerunner of fashion and trends. His controversial advertising campaign has garnered worldwide attention for its humor and social consciousness. In 1985, Kenneth Cole was the first member of the fashion community to take a public stand in the fight against AIDS. Since then, he has continued to support the global fight through both personal and corporate initiatives including the dedication of an ongoing portion of marketing budget to public awareness initiatives. Cole continues to serve as a National Board Member of both AmFAR: The American Foundation for AIDS Research since 1985 and the HELP U.S.A. Homeless project since its inception in 1987.

Known mainly for its shoes, Kenneth Cole Productions also makes stylish clothing and accessories under three brands: Kenneth Cole New York, Reaction Kenneth Cole, and Unlisted. It also licenses the name to products such as hosiery, luggage, watches, and eyewear. Kenneth Cole continues to expand, adding new lines for women and children and a men's and women's fragrance. More than 4,500 department and specialty stores carry its products. Kenneth Cole also operates about 80 retail and outlet stores, a catalog, and a Web site. CEO Kenneth Cole owns 45% of the company and controls almost all of the voting rights.