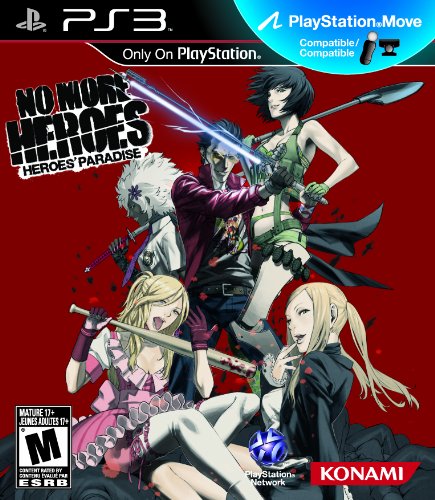 Play as Travis Touchdown as you fight to become the world's #1 Assassin! Use Travis's lethal beam katana to eliminate the top 10 ranked skillful killers of the United Assassins Association. After defeating his original boss, Helter Skelter, Travis takes the position of the 11th ranked hitman and begins his meteoric rise to the top!

No More Heroes: Heroes' Paradise is a third-person, single player Hack 'N' Slash Action-Adventure game for play on the PlayStation 3 gaming system. An enhanced port of No More Heroes, the 2008 hit for Wii, No More Heroes: Heroes' Paradise contains all the action, attacks, characters, missions, side missions and side-jobs that were playable in the original game, plus a whole lot more only available through this Next-Generation port. These new features include: dramatically improved graphics, PlayStation Move support, additional game modes, missions and side-jobs and new boss challenges and downloadable content.

No More Heroes Comes to Next Generation Gaming

For the first time No More Heroes franchise history, fans of the exciting hack and slash series will have the opportunity to see Travis Touchdown in rich high definition graphics as No More Heroes: Heroes' Paradise makes its first appearance on a next generation console in North America. In No More Heroes: Heroes' Paradise, players journey through the sunny city of Santa Destroy as Travis Touchdown, battling to eliminate some of the world's deadliest assassins. Equipped with a razor sharp Beam Katana sword, players start off as the 11th ranked assassin in the world and try to move up the ranks to position themselves as the ultimate killer. During the course of the game, players encounter Sylvia, a mysterious woman from the United Assassins Association, who arranges fights with other higher ranked assassins to help Travis become the number one in the world. Players will either ride through the town on Travis' trusty motor bike or travel on foot to arrive at Travis' next assignment. 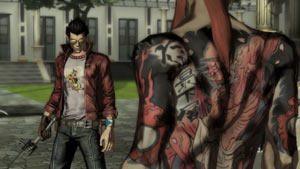 Relive Travis Touchdown's climb to the top of the ranks of the world's greatest assassins, this time in High Def.
View larger.

Using either a normal PlayStation 3 controller or the PlayStation Move motion-detecting unit, players have access to a wide range of physical assaults and katana attacks, with each bout tracked by a dynamic camera that showcases the game's stunning visuals and cinematic fight sequences. By varying the grip and control of the Beam Katana and the timing of their attacks, players have a wide range of moves at their disposal to help Travis battle and defeat his enemies. Defeated foes can also be dispatched with stunning finishing moves, allowing Travis to cement his rising reputation with a series of breathtaking kills.

Travis' progression is enhanced via a series of sub-missions as well as the ability to hone his skills and upgrade his weapon within the lab. Santa Destroy is a living, breathing place, and your anti-hero can enter shops, visit a gym to train, and collect special icons that will enhance his attack options. As players progress through the game, they will have the opportunity to complete deadly missions and side jobs as they make their way up the ladder of the United Assassins Association.

Aside from the side missions, players will also be able to enjoy newly added game modes like "Rebout Mode" where former foes can be challenged again. Also, players will have the opportunity to encounter additional boss characters that were not available in the original episode, but will be on the PlayStation 3 version of the game. Additionally, "Viewer Mode" is also available allowing players to re-watch infamous cut scenes in crystal clear HD graphics. With its stunning visuals, additional levels of action, improved AI and an incredible level of control, No More Heroes: Heroes' Paradise represents a welcome return for one of gaming's most daring creators.